When Curmie first read about this story, he sent a quick e-mail off to Jack Marshall at Ethics Alarms, suspecting (correctly, as it happens) that Jack would be both interested and more likely than Curmie to get a post up first.

Jack, being a lawyer, is able to take a different tack than Curmie, and introduce (or at the very least better articulate) legal arguments Curmie couldn’t.  Jack also suggests that I might see nuances he doesn’t.  I’m not so sure about that, but let me see what I can make of this.  I start by mentioning that Curmie learned about the case from a post by FIRE (the Foundation for Individual Rights in Education), an organization that purports to be non-partisan and, at least to a very large extent, is, although it’s been branded right-wing by some on the left (just as the ACLU has been branded left-wing by some on the right).

Allow Curmie to repeat what he’s said not infrequently over the years: that although his own politics are probably to the left of 95% of the population, in the area of free speech he has more to fear from the remaining 5% than from the multitude to his right.  (You may check out a similar assertion from a decade ago here.)  I remember one incident from over 20 years ago, when I was called into the Dean’s office and reprimanded for something I’d said in class because it “made some students uncomfortable.”  Apparently, “good” was not the desired response to this admonition.

Anyway, I described the passage I was referencing to the Dean and asked two questions: was my comment accurate, and was it relevant?  He agreed that the answer to both questions was “yes.”  I then asked if I had been accused of using inappropriate language (racial or sexist slurs, that sort of thing).  I had not.  I therefore told him the requested apology would not be forthcoming.  Occasionally making students uncomfortable, frankly, ought to be part of the job description.  (I didn’t articulate this last part.) 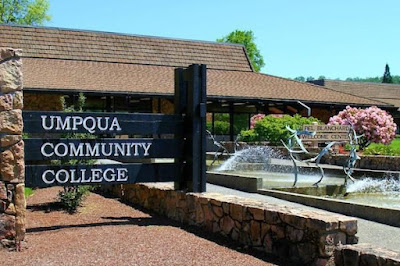 OK, enough of that; here’s the story: This February, Kaylyn Willis was enrolled as a nursing student at Umpqua Community College in Oregon.  She was taking a course called Chronic I, taught by Patrick Harris.
Apparently one of the goals of the course was to get students to employ “critical imagining” to better understand the perspective of a patient suffering from a chronic disease or disorder.  A few weeks into the class, the assignment was “to reflect on the support systems of chronically ill individuals and how a person with a chronic illness might respond to the sudden and unexpected loss of a support system.”  (The quotation is from the FIRE story; it’s unclear whether this was the exact wording of the assignment.)

Ms. Willis submitted an imaginative story about an ALS sufferer who shoots and kills her husband, who was that support system.  It’s actually an intriguing take, looking at the possibility of self-inflicted damage caused as an indirect result of the affliction.  It’s inspired by a 2015 Wisconsin case in which a jury found an ALS victim not guilty of murdering his wife and sister-in-law because he suffered from a neurocognitive disorder.

Mr. Harris teaches nursing, not literature, and proceeds to prove it by, to use Jack Marshall’s phrase, “flip[ping] out.”  Without evidence, or any appearance of thought, he decided Ms. Willis’s post was a joke.  He gave it a zero.  He may be a good nursing teacher, but he is singularly unqualified in terms of both credentials and temperament to judge an assignment like this.

He responded to an email from Willis with this: “Do you honestly think that your post on a nursing school assignment was appropriate?  Joking about killing your husband?  I’m really questioning your critical thinking if you think this was an appropriate discussion post.”  Actually: 1). Yes, it was appropriate, since it met all the criteria of the assignment.  2). It wasn’t a joke, as any sensitive reader would understand, or at the very least suspect.  3). I’m really questioning how anyone this oblivious could possibly presume to judge someone else’s “critical thinking.”

Here’s the thing.  A faculty member is ethically obligated to apply what amounts to an “innocent until proven guilty” approach to dealing with student motives.  You think a student plagiarized?  Without proof, it’s just another paper.  You think a student isn’t taking a project seriously?  What you think doesn’t matter.  What can you prove?

Eliminate all other options before making a decision.  Sure, call that student in and ask some hard questions.  Curmie has done that dozens of times over his career, and he’s developed something of a reputation for catching and punishing cheaters.  But intent matters.  If a student didn’t know s/he was breaking the rules, it’s time for a teaching moment, but not (necessarily, at least) for penalties.  Curmie isn’t a mind-reader, and Harris is even less of one.

Harris did the exact opposite of the ethical response, scurrying off to punish Willis even further, and the student was promptly removed from the program (!).  Seriously?

Completely apart from the 1st Amendment issues described by FIRE and on Ethics Alarms, this is some really hasty and frankly sloppy decision-making.  And let’s be real: violations of a handbook prohibition against “[a]cts which are dishonest, disrespectful, or disruptive” could be absolutely freaking anything.  Forbid the “dishonest,” absolutely.  But (insert B-movie gangster voice here) Curmie’s got your “disrespectful” and “disruptive” right heah.

This kind of language is more common in high schools, where principals want absolute control and school boards are stupid enough to give it to them.  But the hierarchy of community colleges tends to work the same way: they believe their handbook came down from the mountaintop, and that its authors elbowed Moses and his tablets out of the way to get to the publisher first.  In fact, their little rulebook is seldom more than a thinly veiled declaration of absolutely not-to-be-questioned administrative authority.

Unsurprisingly, Ms. Willis appealed the inane decision, but the case was turned over to an anonymous (!) “grievance panel” which, shall we say, was not comprised of the brightest lights in the marquee.

The panel highlighted a sentence in Willis’s inherently fictional response to a writing prompt as if… well, damned if Curmie can figure that part out, but it was very, very, very bad, whatever it was.  Willis, you see, in her post, “did not establish a caring relationship or create a positive environment.”  1).  Bullshit.  2).  Any such requirement for a class assignment is intrinsically flawed, and an instructor who either willfully misinterprets a students intentions or is too dim-witted to ascertain them truly has created an unhealthy environment.

She also “failed to take into account the culture of UCC by being insensitive to the October 1, 2015 event.”  1). Not her job.  2). Recreating the specific circumstances of that “event” (a student shot and killed a faculty member and eight students before killing himself) would indeed have been insensitive.  This wasn’t… or else literally any reference to any shooting anywhere under any circumstances would send the entire administration and professoriate diving under their desks like a bad parody of “duck and cover” drills.

The panel also accuses Willis of “[choosing] the wrong communication modality and technology.”  Stripped of the jargon, this means that Willis is deemed unfit as a student because she posted online, when that is what the assignment required.  Seriously, how can these people feed themselves?

Oh, and Willis also “described unethical and immoral behavior.”  Are you fucking kidding me?  First off, “described” (!).  Not “participated in” or “advocated,” mind you… “described.”  Of course, the panel seems to regard what Willis did as “unethical and immoral,” and here they are, describing it.  (Switch to Geico gecko voice now) Oh dear, oh dear.

Curmie is going to skip the rest of that incompetently thought-out document, instead merely citing Jack Marshall’s simple and direct statement that “The student didn’t have to justify her story for it to be fully protected speech.”  (Note here the parallel to the case of track star Brianna McNeal, who was similarly under no obligation to provide a reason why she missed a drug test, and to that of Courtni Webb, the high school student threatened with expulsion for writing a poem which sought to understand the motives of Newtown shooter Adam Lanza).

And then, of course, FIRE got into the act, and the college’s lawyers responded, and FIRE replied with this: “Willis may be in trouble for her fiction, but it’s UCC that can’t accept reality…. UCC is pretending that Willis’ rights don’t exist.  FIRE knows better.  We won’t close this chapter until Willis is reinstated and allowed to complete her program.”  Yeah, what they said.

FIRE’s goal would be a step.  But a better outcome would be for Ms. Willis to transfer to an institution a little less recto-cranially inverted, one that has some basic respect for its students and/or the US Constitution (either one would have been sufficient in this case).  Perhaps Mr. Harris doesn’t deserve to be fired, but he should certainly be reprimanded and not allowed to teach this particular course again.  Ever.  The various administrative minions who carried out this little purge should be demoted or (ahem) encouraged to resign.

One final thought: it is quite likely that Ms. Willis is “that student,” the one who doesn’t really fit but does just enough good things and just few enough bad things to remain in the program.  Curmie has seen dozens of them over the years, and the urge to find something, anything, to legitimize a removal from the program is powerful.  But that’s not how it works, and behaving unprofessionally to enforce silly and misapplied standards of pseudo-professionalism would seem to be especially contra-indicated.

Great job. And your post is funnier than mine, and this fiasco requires the humorous touch.