We’re still scurrying towards the finish line to get a few more Curmie contenders into the mix. This iteration is the Stupid Decisions Edition. There are almost too many candidates to be able to narrow the field much, but here’s a quintet of my favorite whoppers. It’s a pretty broad category, so I’ve suggested a few subheads.

The clear winner in the Not Even Legislatures Are as Stupid as State School Boards Division goes to the great state of Florida, whose state Board of Education decided in November to establish different standards for different students, based on race. Yes, on race. Not on a combination of variables—economic status, parental education level, etc. Nope: race. Actually, other taxonomies are considered, but separately: the result is the same as if other categories weren't considered at all.

That this is one of the most colossally heinous ideas of the millennium is self-evident. It perpetuates the myth of African-American and Hispanic inferiority, undermines the accomplishments of schools, teachers, and students of all demographic profiles, and further excuses inequities in funding and other real-world means of leveling the proverbial playing field. Rather than adopt a strategy to raise achievement levels for all constituencies, the state board institutionalized different standards as a recognition of reality and as a means of continuing a waiver from some parts of the NCLB act.

Yes, you see, Asians are smart, and blacks are stupid, so of course we can’t expect them to achieve at the same level. This mind-meltingly inane policy manages to be condescending and balkanizing at the same time. It treats students as numbers rather than as individuals, ignores those of mixed race (like, say, the guy in White House, for example), plays to the most destructive fantasies of both the loony left and the loony right, and generally succeeds in being the single most inane state school board decision in years… and I say this as an educator in Texas, where an SBOE ruling that was merely counter-productive and inept would be hailed as progress.

The Big Brother Arrogance Subdivision was captured by the Northside Independent School District in San Antonio. Not content with the inherent invasion of privacy of “smart” student IDs that track students’ locations at all times, these idiots have upped the ante: students who refused to bow down to the Orwellian gods

cannot access common areas like the cafeteria or library, and cannot purchase tickets to extracurricular activities. WND reports that the district has threatened to suspend, fine or involuntarily transfer students who fail to comply and officials have noted that “there will be consequences for refusal to wear an ID card as we begin to move forward with full implementation.”

Oh, and they can’t vote for Homecoming King and Queen, either.

The rationale for this hugely intrusive program is, of course, money. The powers that be are, to put it kindly, whores. They’ll do anything for money—in this case funding that is based on attendance—including implementing an inane program the has no chance of success (if I’m going to go truant, I’m not going to take my stupid badge with me), and which, since all students are subject to this monstrosity of a rule, punishes the good students in a vain attempt to control the activities of the bad ones.

It is none of the school’s damned business where students are when they aren’t in class, and if you want to have them in class at the appointed hour, try giving them an education worth having. Everyone, and I do mean everyone, associated with implementing this policy should be fired on the spot. Now.

The Outrageous Punishment of the Innocent category is claimed by Highland Middle School in Anderson, IN. An unidentified teacher had synched her iPhone to her school-issued iPad. Apparently she wasn’t thinking, and a topless photograph of her popped up when a quartet of 13-year-old boys were playing a game on the iPad. Needless to say, they looked.

The result? Why, the boys were suspended and threatened with expulsion, of course. Even the Assistant Superintendent, an intellectually deficient creature named Beth Clark, grants that the image appeared quite by accident. The teacher, whose actions were reckless but not (apparently) volitional, was punished in some unspecified way, but kept her job. That probably makes sense: if, as appears to be the case, she inadvertently mishandled technology, she learned a lesson and won’t make that mistake again. If it was intentional, it will happen again, and the walls had better come tumbling down. The students, who did literally nothing wrong—and no one suggests otherwise—became pariahs. Uh, no.

This is yet another case of a school administration being either too craven or too dim-witted (or both) to be smarter than the rulebook. Discretion, people. Seriously. 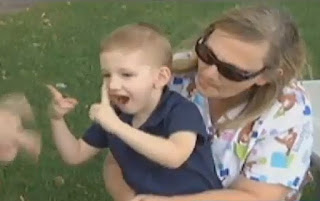 The Nanny State Run Amok Division was captured easily by the lunatics running the asylum in the Grand Island (NE) Public Schools. Three-year-old Hunter Spanjer is deaf. His name, in S.E.E. (Signing Exact English, the sign language he uses), is based, not unreasonably, on the notion of hunting: hunting/Hunter… get it? That means a gesture that sort of resembles a weapon. Sort of. Decide for yourself. That’s Hunter in all his threatening glory at right.

But that apparently violates—wait for it—the “weapons in schools” policy that forbids “any instrument that looks like a weapon.” Seriously, how can these people feed themselves? First off, a hand is not an “instrument.” We’re done, already. Secondly, it’s his name, and the only way he has of identifying himself. Thirdly… did I mention that he’s three?

School mouthpiece Jack Sheard intoned that “We are working with the parents to come to the best solution we can for the child.” Hey, I’ve got an idea, Jack. How about you try not being a fucking moron? Would you give that a whirl? It’s a stupid policy to begin with, but you can’t really blame the document for this one. Someone… some adult with pretensions of competence… decided that a three-year-old signing his name was a violation of a weapons policy. The mind boggles.

Be it noted: the school reversed its policy (while pretending otherwise, of course) after being humiliated locally and, thanks to bloggers, internationally. That hardly matters. That anyone, anyone, would even for an instant consider young Hunter to be anything like a threat is too ridiculous for words.

Finally, there’s the Censorious Asshat category (thanks to our friends at Popehat for the appellation), won this go-‘round by Principal Christopher Kloesz of Loveland High School near Cincinnati. He fired Sonja Hansen, the theatre director/choreographer of the school’s recent production of the stage musical version of Legally Blonde, which, by the way, got standing ovations every night, for violating one of those intentionally vague “code of conduct” tenets.

Kloesz… cited “bootie-bounce dance moves” and the use of the word “skank” in the script. Loveland, along with most schools across the U.S., has a strict no-alcohol policy, and Hansen was cited for a scene in the musical that includes a champagne party involving a group of buttoned-up Harvard University students. She pointed out that it was not staged as a rowdy college party….

Hansen said she was shocked by the administration’s negative reaction to Legally Blonde after the school produced the full version of Grease in recent years, as well as Beauty and the Beast last spring “with a huge tavern scene and beer mugs.” Students also used real cigarettes as props during a scene in Joseph and the Amazing Technicolor Dreamcoat. “I didn't hear any complaints,” Hansen recalled, noting that the Loveland High production of Grease, which includes drinking, smoking, sexuality and teen pregnancy in its script, had higher ticket sales than Legally Blonde. “I never saw anyone leave. We had no one ask for refunds,” she said of Legally Blonde’s run.

At first glance, this is just a case of a principal who is arrogant, prudish, cowardly, stupid, and inconsistent. That in itself would be enough for legitimate Curmie consideration… but it’s worse than that.

The school administration had signed off on the show when the contract with Music Theatre International was signed months ago. The word “skank” is right there in the script. So is the drinking scene (and perhaps someone ought to explain the concept of aesthetic distance to the dim-witted Mr. Kloesz). I’m willing to bet the choreography was less risqué than what happened at the Homecoming dance. Rehearsals had been going on for months, and were open. In other words, Kloesz (who was new to the position this fall) didn’t honor commitments made in the school’s name, and, in addition to being… well, a censorious asshat, is also too fucking lazy to do his job (assuming censorial powers to be a legitimate part of the job at all) and read the script, attend a rehearsal, or otherwise abort the project before people spent literally thousands of hours of work on it. Better yet, tell Hansen you don’t want X, Y or Z next time: don’t fire her for doing her job, just because you didn’t do yours.

Superintendent Dr. John Marschhausen seems to be not quite as stupid as Kloesz (that’s pretty stiff competition, after all), but even more craven. He issued an apology to Hansen even as he was signing off on her dismissal. Stand up to the guy who works for you, you pusillanimous putz!

I’ll give the last word to the creators of the play—composer Lawrence O’Keefe, lyricist Nell Benjamin, and book writer Heather Hach. Here’s a statement they sent to Playbill:

We have no idea what the superintendent's statement means. We are surprised and disappointed that an educator who put on a show about a woman succeeding through education was fired for it. Any show that tries to be smart and funny may offend some people, but Mrs. Hansen and her students looked beyond that and saw the positive message of tolerance and female empowerment at the heart of the show. We only wish the school administration had done the same. We applaud the parents and students who supported Mrs. Hansen.

Yeah, what they said.

So, there you have it… the Stupid Decisions Edition. I may try to squeeze out one more compendium before the end of 2012… but it might not happen.

By the way, I’m indebted to Jack Marshall for bringing the last three of these stories to my attention. You can read his commentary here, here, and here, respectively.
Posted by manjushri924 at 3:09 PM